We’ll recommend local showrooms whose kitchens cost similar to the chains & trade-only suppliers, but are higher quality & will last much longer.

They are also better value than the chains for fitting (optional). Their average fitting price is only £1,500, which is less than the chains & similar to what builders charge.

Plus, some offer pay monthly finance.

All showrooms offer FREE, no-obligation quotes & are within half-an-hour’s drive.

“What a fantastic service! You have been of immeasurable help in sorting the wheat from the chaff!”

Plus, by using an independent kitchen showroom, you’ll get a kitchen that’s designed to your individual requirements & makes best use of the available space. In contrast, the chains & trade-only suppliers design kitchens using a one-size-fits-all approach which rarely works.

Below are some examples of the kitchens these showrooms offer: 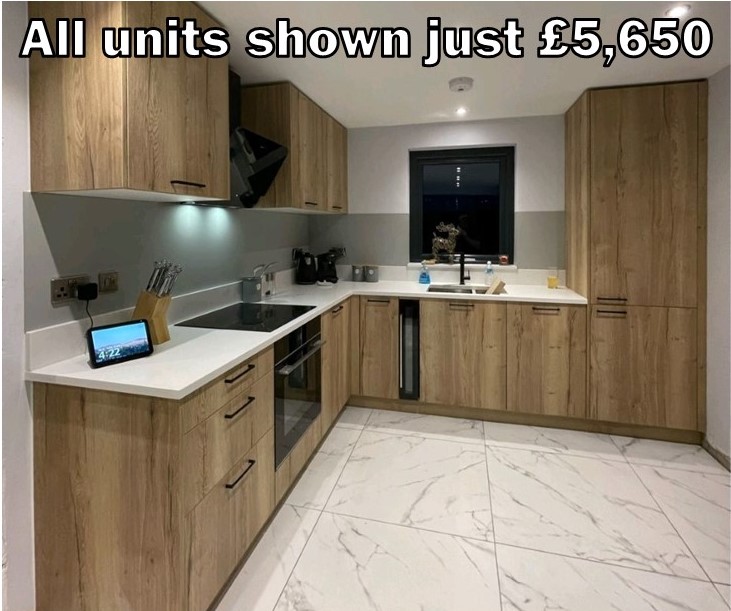 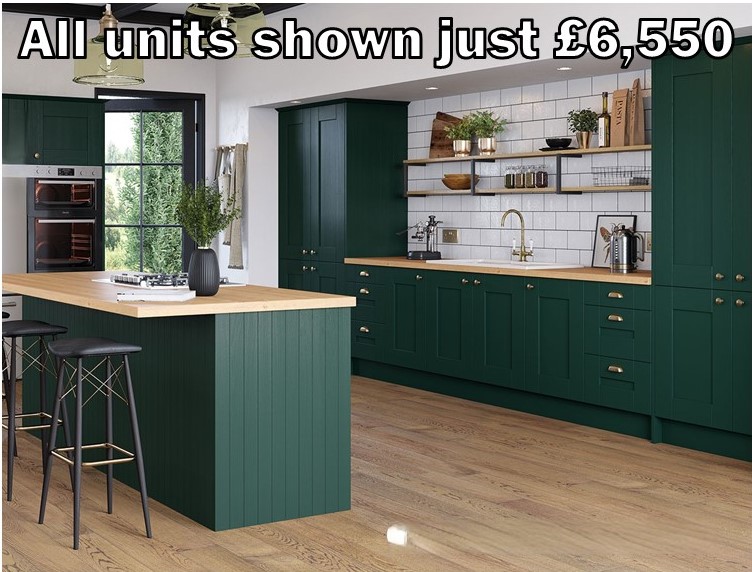 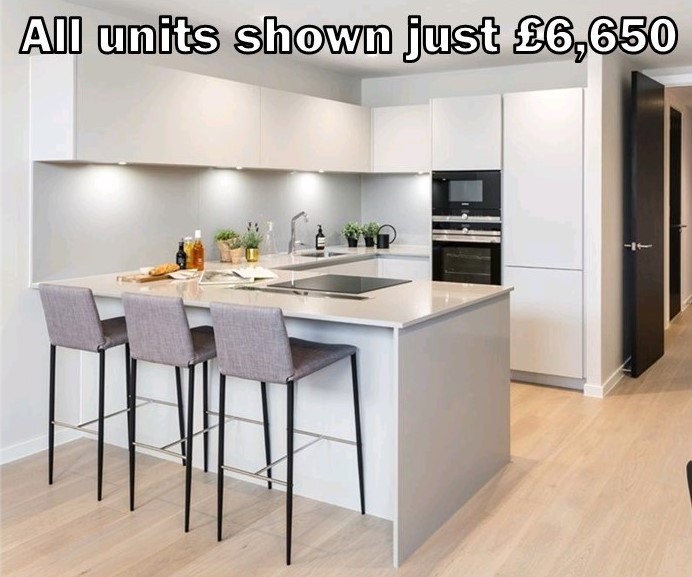 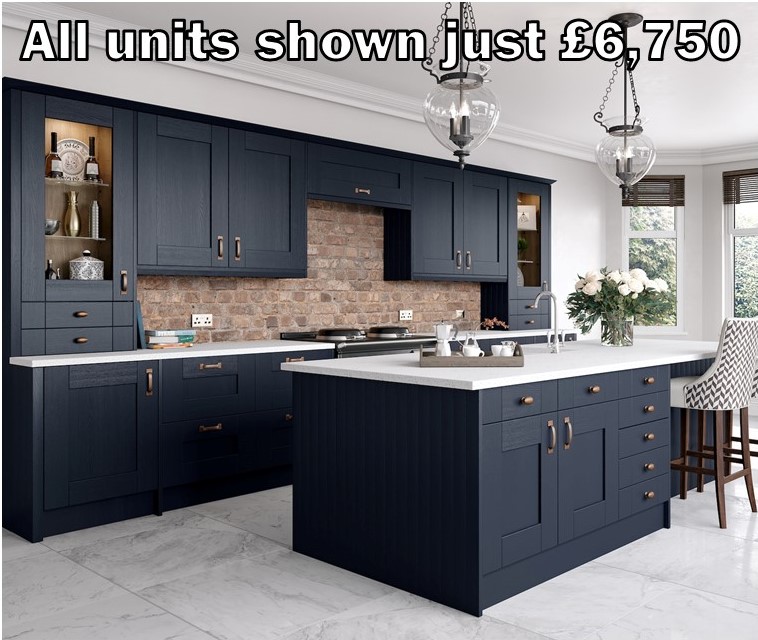 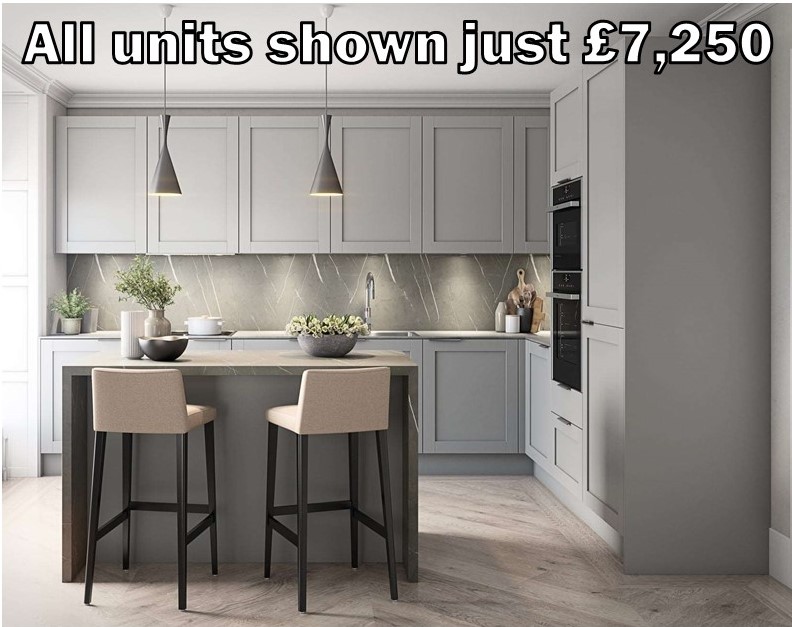 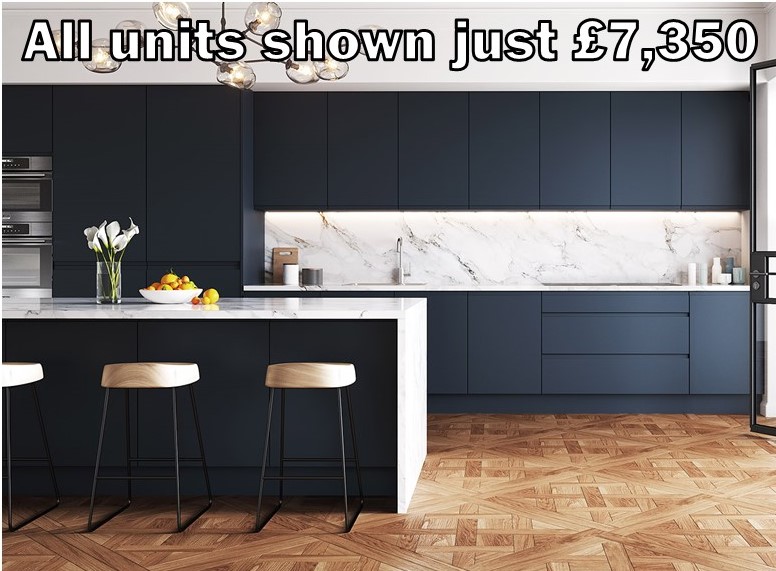 Why are their units higher quality than the chains & trade-only suppliers?

The type of doors used:

The doors are mostly the high quality painted/lacquered type. In contrast, the chains & trade-only suppliers mainly sell the low quality foil, PVC & vinyl wrapped types. The problem with the wrapped types is they peel.

below – wrapped doors that are peeling:

The quality of the chipboard used:

In contrast, the chains & trade-only suppliers tend to use cheaper, low density chipboard. The problem with low density chipboard is it bows under the weight of the worktops. The first signs of bowing is usually seen on the backs of the units. Once the backs start to bow, it isn’t usually long before they come away completely, exposing the wall & any pipework behind.

The type of edging used:

The units feature impact resistant PVC or ABS edging. The purpose of the edging is to protect the delicate front edges from chips & damage & prevent any water ingress. In contrast, the chains & trade-only suppliers tend to use standard melamine edging which offers little or no protection.

How can a small showroom be better value than the chains?

Because they have lower overheads. Unlike the chains, they don’t have large superstores or costly TV adverts to pay for. Therefore, they can afford to offer higher quality kitchens than the chains, for a similar price.

Surely the chains will be cheaper if their units are in the sale?

No – because their sales are fake. The chains try to mislead consumers into thinking they’re getting a bargain by inflating their prices & then offering 50% off. They then try and pressurise people into putting down a deposit by telling them their sale ends in the next few days.

Isn’t the cheapest way to buy a kitchen via a builder?

No – because their discounts are also fake. Builders will tell you they’ll save you a fortune because of the 80% discounts they get from trade-only suppliers. However, this is the same sales trick the chains use. Trade-only suppliers hike up their prices so builders can then tell consumers they get 80% off. Again, this is designed to mislead people into thinking they’re getting a bargain.

In reality, the prices builders quote for kitchens is usually similar to the chains.